“The CableRobot simulator provides a novel approach to the design of motion simulation platforms in as far as it uses cables and winches for actuation instead of rigid links known from hexapod simulators. This approach allows reducing the actuated mass, scale up the workspace significantly, and provides great flexibility to switch between system configurations in which the robot can be operated. The simulator is used for studies in the field of human perception research, flight simulation, and virtual reality applications.

The CableRobot simulator uses a parallel kinematics architecture where the usually rigid links are replaced by winch driven cables. While some research institutes work in the field of cable-driven parallel robots, none so far has developed a system for the safe transport of passengers and with the focus on high performance motion simulation.

The use of cable robots for motion simulation allows to build simulators with an extraordinary power-weight ratio of approximately 2.6 kW/kg with respect to the provided large operational space. The simulator provides a maximum acceleration of 5m/s2 in a workspace of 4x5x5m3 and maximum roll, pitch, yaw angles of ±40º, ±40º, ±5º respectively. Using winches with a total power of 384 kW allows for cable forces of 12000N and a maximum acceleration of 14 m/s2 at a payload of 200 kg. The bandwidth of the system varies between 10 and 14 Hz depending of the cable length and cabin position inside the workspace.” 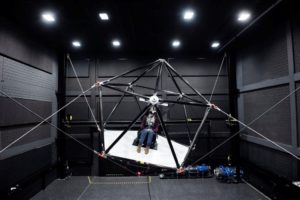 “With the CyberPod we can study the interplay between the human visual, auditory, vestibular and neuromuscular systems.

The center piece of the CyberPod is a hexapod Stewart platform (Bosch eMotion 1500) with six degrees of freedom. Mounted on the motion-base is a 2.5 by 2.2 m aluminum platform.  For visualizations, the platform features a removable projection screen located 1.1 m away from the participant, resulting in a field of view of approximately 95°×53°. The ProPixx projector has a maximum resolution of 1920×1080 pixels (at 120 Hz) or a refresh rate of up to 500 Hz in RGB and 1440 Hz in grayscale (at reduced resolutions).

It provides deterministic timing and is particularly suited for psychophysics studies. Passive and active stereo projection is possible. Instead of the projection screen, the platform can also be used with our head mounted display systems in conjunction with an optical tracking system (Optitrack V120:Trio) to measure head pose and optical marker locations at 120Hz.

Auditory stimulation is provided using either a surround sound system or noise-cancelling headphones. The characteristics of the motion system have been objectively measured with a standardized approach. The system time-delay is below 20 ms […]. The system bandwidth depends on the exact mechanical configuration equipment mounted to the platform, but exceeds 30 Hz for the most basic configuration, consisting of a seat on the platform only.” 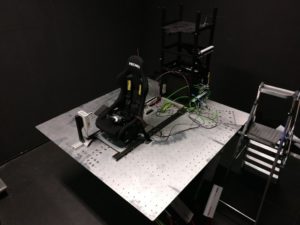 “The CMS consists of an industrial robot arm with 6 independent axes, extended with an L-shaped cabin axis. The seventh axis allows for varying the orientation of the cabin with respect to the robot arm by changing the location of the cabin’s attachment point from behind the seat to under the seat, or any intermediate position.

Recently, the CMS has been further extended with a linear axis of 10 meters. The resulting 8 degrees-of-freedom (DOF) provide an exceptionally large workspace. Several extreme motions and positions can be achieved, such as large lateral/longitudinal motions, sustained centrifugal motions, infinite head-centered rotation, and up-side-down motions. Such motions and positions cannot be achieved in conventional simulator architectures, which makes the CMS a unique test bed for studies into motion perception and spatial orientation.

To ensure the synchronous motion of the robot axes and the external axes (cabin and linear axis) custom software was developed. This software combines/distributes the signals coming from/going to the respective axes while making sure all timing requirements are met. Furthermore it also monitors the safety status of the system ensuring very high safety standards.

The cabin (including the cabin axis) was custom built, and allows for mounting a range of different input/control devices:

The cabin is equipped with a stereo projection system (eyevis GmbH) with a field-of-view (FOV) of 140ºH x 70ºV and a resolution of 1920 x 1200 on each projector. High fidelity 3D visualization can be achieved with projection filters and glasses (Infitec). 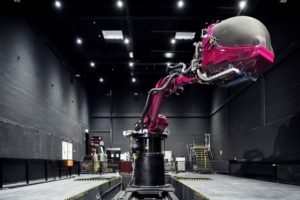 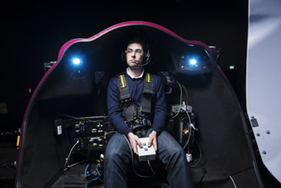