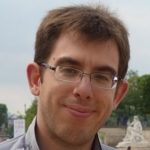 Dr. Florent Colombet graduated in 2006 from Arts et Métiers, Institute of Technology and got his PhD, under the supervision of Pr. Kemeny in 2010 for his work on speed perception in driving simulation. Since then, he has been working at Renault Technocenter in the Driving Simulation & Virtual Reality department and became referent in AD/ADAS driving simulation in 2016. His main topics of interest are motion cueing, motion perception and cybersickness. Dr Colombet is a member of the DSC Europe VR Scientific Committee and its Organizing Committee.