The most significant simulation congress in the automotive industry, DSC, this year took place in Munich, because BMW wanted to show the assembled experts their brand-new system of simulation which will set new standards worldwide shortly before officially putting it into operation. The 20th Driving Simulation Conference, DSC 2021, placed a special focus on automated driving and the ensuing vehicle validation challenges.

Thanks to its precision and its validity in mimicking reality ever more closely, virtual testing can almost entirely replace testing on the test track and on the road. In this scenario, the Driver in the Loop (DiL) method has become crucial, especially when it comes to autonomous, or rather automated, vehicle testing and verification. The simple reason being that the driver behind the steering wheel with his/her feedback constitutes the most reliable man-machine interface. Nissan, Renault, and BMW[i] have invested millions of euros into new simulation systems to stay abreast of developments. There is consensus trend on simulation as being the sine qua non. Thus, experts unanimously agree that digitized simulation makes it much easier, faster and more efficient to fully think through new technologies. 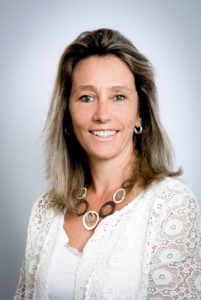 In her keynote on ‘ADAS and autonomous connected vehicles as a major challenge for the automotive industry’, Sabine Calvo, Alliance Global Vice President (AGVP) for the Renault-Nissan Alliance, pointed out that car manufacturers “are developing more and more complex products that have to comply with more and more stringent regulations relating to unacceptable validation costs, unless we change the game.” Referring to her company’s

plan and regarding vehicle validation, Calvo mentioned three main targets to stay profitable: a drastic reduction of validation costs by half, a robust validation of systems and software, plus a reduction of project lead times by one year. Europe may have a difficult challenge to cope with the development of battery electric vehicles. However, when it comes to driving simulation, Europe is leading the way, with DSC as a hub of knowledge concerning procedures and technologies for testing and safeguarding automated vehicles.

Europe at the forefront of driving simulation

Does the model describe reality accurately enough? Can we trust the results of the simulation? These are the fundamental questions of simulation. As the sensitivity, hence the ability of simulation to depict the facts to be tested correctly and trustworthily, continues to increase, testing can be carried out ever more accurately. No vehicle manufacturer can afford, either financially or in terms of time, to rack up hundreds of millions of real test kilometres. Depending on which aspect of the test task the simulation focuses on during development, through model, software, hardware or operating driver of the vehicle or the entire vehicle is integrated into the virtual test environment loop (M/S/H/D/ViL), in an increasingly digitized simulation test process. 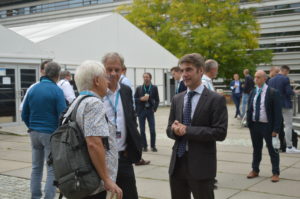 Meticulous investigations, forward-looking simulations of all conceivable and even improbable scenarios are mandatory, especially for automated driving, before such vehicles, which are responsible for their own safety, can be released into real road traffic. This is one of the challenges on which car manufacturers are working intensely, because the autonomous car of the day after tomorrow will need robust and reliable systems. “Simulation will account for 99 per cent of the testing effort for autonomous vehicle validation” says Andras Kemeny, President of the European Driving Simulation Association, and Expert Leader of Immersive Simulation and Virtual Reality at Renault.

In short, virtual testing almost completely replaces traditional on-road validation. All that remains to be performed on the road are the very last checks, such as how the driving experience in the respective car really feels for a driver or passenger, a step which is thoroughly pre-tested by ‘Driver in the Loop’ simulations (DiL). Above all, simulation is unbeatable in speed and accuracy when it comes to comprehensive testing of complex control algorithms.

ADAS as main lever for efficiency of validation 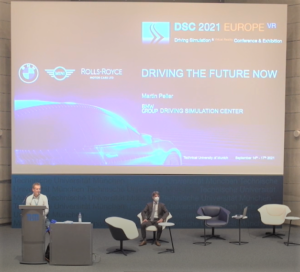 To cope with all the imminent challenges, BMW three years ago decided to build a completely new simulation system world in the middle of the precincts of its Research and Innovation Centre (FIZ) in the north of Munich. All 14 simulators have recently fully gone into operation. Driving in realistic virtual worlds with the help of artificial intelligence is elementary, not only for automated driving, but also when it comes to seating citizens, i.e. existing or potential customers, in a vehicle that is part of a high fidelity simulator and can reflect the impressions of real driving and thereby test reactions among drivers. The Bavarians have thus set new standards worldwide.

Since ADAS has become the main lever for validation efficiency, followed by reliability and durability in second position and passive safety in third, as Sabine Calvo pointed out in her speech, creating efficiency and synergies in vehicle development was the unifying motto. According to Martin Peller, head of BMW’s new driving simulation center, while mapping out the new era of simulation, the car manufacturer has always had the customer in mind.

BMW eventually defined more than fifty use cases for fast digital development. This case study resulted in a demand for 14 different simulators and necessitated a total investment of one hundred million euros for their construction. Equipped with the latest technologies, the simulation site can praise itself as the most versatile of its kind in the automotive industry. The aim is to keep development costs at bay without compromising quality, despite increasing complexity, and thus also the final price of the vehicle for the customer.

DSC will next year take place in Paris, not far from Groupe Renault’s high performance ‘ROADS’ simulator that will be presented to the participants of the conference. The brand-new driving simulator, the acronym being short for Renault Operational Advanced Driving Simulator, is the result of a partnership with AV Simulation. ROADS will consist of fast electric linear power systems of plus/minus 15 metres long rails in two directions, a plus/minus 180 yaw table for urban driving, a complete 360 degree dome with ultra-high 3D definition, as well as a complete car cockpit equipped with head and eyes tracking systems.

The world of simulation is a closely knitted world of experts, with AV Simulation as one of the key players. Originally founded by Renault and Sogeclair Group in 2017, AV Simulation combines 30 years of experience in engineering, simulation, automotive domain knowledge and financial stability. This year, AV Simulation has welcomed Dassault Systèmes, world leader in CAD and PLM software, as an additional shareholder. To the effect that Dassault Systèmes and AV Simulation will integrate SCANeR, the most comprehensive simulation platform addressing prototyping, validation and training of ADAS, Autonomous Vehicles as well as Human Machine Interaction (HMI), into the 3DEXPERIENCE platform. This will enable customers to collaborate, simulate and validate throughout the development life cycle.

Andras Kemeny, one of the main protagonists in the virtual reality and driving simulation fields in France and Europe, was the inventor of SCANeR driving simulation software back in the 1990s. Among other positions, he is Expert Leader for Immersive Simulation and Virtual Reality with Renault and President of the Driving Simulation Conference which he founded in 1995.

The significance of DSA with its regularly occurring conference can be perceived not just by the constant exchange among researchers and industry, but also by the fact that several innovations in simulation could be introduced thanks to the constant upstream exchanges and cooperation carried out by the international simulation community.

Driver-in-the-Loop on the Advance (English version) >