“In order to improve the physically correct representation of light beams, a new generation of night drive simulator, called HELIOS, has been inaugurated in Renault Technocenter in Guyancourt […] and has been announced the 5th of September during the Driving Simulation Conference 2018. 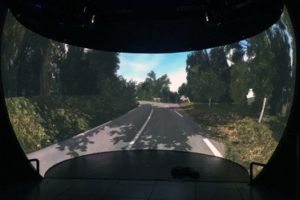 This simulator is composed of a spherical screen with a field of view of 225° and a pixel size equivalent to the precision of the human eye (1/60°), beamers and a vehicle which gives to the driver the feeling of real driving.
To realize the picture, laser beamers from SONY are installed on a specific structure at the roof of the room. With this system of projection, the image resolution is around 64 million pixels. A high level of contrast is available to give the possibility to represent very dark area for the lighting simulation. 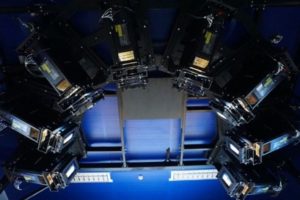 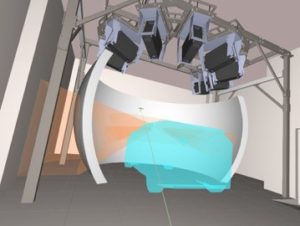 With these 2 characteristics, it will be possible for Renault to reach the best level of representation of a light beam, especially for high beam which is the function on which all the carmakers are focused now with the development of ADB solutions. Regarding the simulation software, the simulator uses SCANeR™ from AV-Simulation. The driver is installed in the cockpit of a real car. All the commands of this car are monitored, and a computer manages the behavior of a virtual vehicle. Thus, it is possible to drive on a virtual road projected on the spherical screen. In addition to this simulation, it is possible to add on it, light beam patterns. It can be basic functions like low beam and high beam or more sophisticated ones like adaptive Driving Beam with the integration in the simulation of additional vehicles, virtual front camera and a software for the activation of different part of the light beam.