“The visualization is realized by an HTC Vive (FoV: 110°; Resolution: 9.8 pixel per degree (ppd) per eye) on which a wide-angle camera is mounted to generate the AR in combination with a bluescreen.

The latter surrounds a half-vehicle mock-up including a steering wheel, pedals, and a 2.1 audio system. The weight of HMD and camera amounts to 900 g. The AR system enables the subject to see parts of their body as well as the real vehicle mock-up in the HMD, as depicted in Figure 2.

The virtual simulation environment is only implemented in the bluescreen areas that the head-mounted camera sees.” 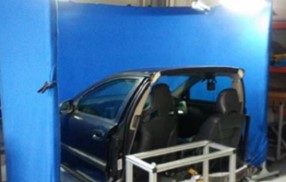 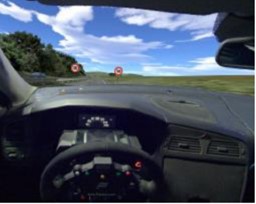 “It offers a FoV of 180° generated by three projectors with a resolution of 32 ppd on three flat screens. A full vehicle mockup with pedals and a steering wheel is included. The 4.0 sound system of the vehicle mockup is used for audio simulation. 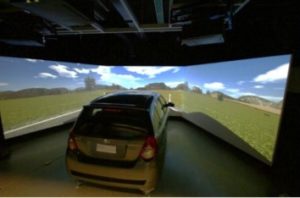 Both simulators are equipped with the simulation software SILAB by the Würzburg Institute for Traffic Sciences (WIVW).”